PLOT A SUMMARY: Spike tells Emma that she’s dating Emma’s teacher, Mr. Simpson.  On the outside Emma’s ok with it, but she’s actually unhappy with the situation because she feels like Simpson is taking away her mom.  She starts being rude to Simpson, calling the junior dance lame and gets upset when she catches her mom and Simpson making out.  But that’s not the only reason she’s upset…Both her and Manny think Craig likes Emma.  When Spike ditches girl’s night to go on a date with Simpson, Emma and Manny get Craig to sneak them into the senior dance.  Once in, they’re surprised when Craig asks Manny to dance instead of Emma.  Emma storms home and that’s when she sees her mom making out with Simpson and gets upset.  She doesn’t know if she can accept her mom and Simpson are dating, but Spike assures her that she will always come first.

Dear Emma, I feel your pain. It sucks when the person you like, likes your friend.  It sucks when your parent starts dating someone new, because you just know that person will become more important than you.  Plots that make you think are fun…but plots like this are also enjoyable because there’s not necessarily any thought required.  The message is so straightforward, and the feelings are clear-cut.  What kid hasn’t said “Oh yeah I think it’s fine” when their parent starts dating, but not really mean it?  But as a teen girl when you feel like you’re losing your mom and you’ve just lost the guy you like of course it feels like the end of the world.  Manny plays it cool, and poor Craig is unaware that these girls think the world of him.  If people can’t help how they feel, then who do you blame when love doesn’t go your way?

The Spike/Simpson romance brings a sense of closure if you’re someone who has watched Degrassi High.  In one of the final episodes of the series Spike had a massive crush on Snake, and asks him to the dance.  He says yes, but it turns out he really wants to go with Michelle (the girl he likes)…however he turned Michelle down because he already said yes to Spike.  Spike gracefully steps back and makes up an excuse as to why she can’t go to the dance, so that Snake could go with Michelle.

Spike and Michelle weren’t friends; they didn’t hang in the same social circles. But Spike never harbored any anger toward Michelle or Snake, though you could see the disappointment and dejection in her eyes.  That same look could be seen in the eyes of Spike’s daughter some 10 plus years later, as she watched her best friend walk away with the guy that was supposed to like her.  If there’s any lesson to be learned here it’s that times change, but being rejected will always feel the same.

PLOT B SUMMARY:  A breakdance competition will be held at the senior dance, with the grand prize being awesome seats at a Leafs’ hockey game.  Jimmy and Spinner plan to win, but upon seeing Spinner’s “moves,” Jimmy decides it’s best if they enter the contest separately.  That makes Spinner mad and he plans to one up Jimmy’s Michael Jackson routine.  Both guys sabotage each other’s routine: Jimmy replaces Spinner’s dance mix cd with slow music, and Spinner steals Jimmy’s breakdancing pants.  In the end neither win, allowing for Marco to walk away with the tickets. 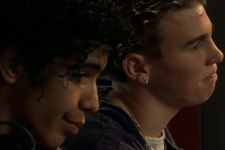 Degrassi excels at creating friendships that are different from each other.  Spinner and Jimmy’s storyline delivers an excellent change of pace to the more serious tone that can be found within Emma and Manny’s.  I think we can all agree that Shane Kippel isn’t the best at acting…all the better for a character who isn’t too bright to begin with, giving us a gem with his polar bear analogy.

The humor extends itself with the same concept that makes me enjoy a show like It’s Always Sunny In Philadelphia: you’ve got friends who place their own interests first, yet even with their willingness and determination to screw each other over they all fail miserably in the end.  Watching this episode after having watched every episode since, Marco and the writers also bring unintentional humor to this plot without Mr. Del Rossi saying a word.  It’s just funny watching a guy who ultimately turns out to be gay walking away with ladies on each side, holding the big prize…tickets to a sport he knows nothing about.