Degrassi Episode Review: U Got The Look

PLOT A SUMMARY: Manny has a crush on Sully, but he doesn’t notice her because she’s a “cute” girl instead of a “hot” girl.  Manny decides to change her image by wearing sexier clothes, and immediately draws the interest of JT.  Feeling good, Manny decides to upgrade her attire by wearing a thong, which is visible because of her low-cut jeans.  She continues to catch the eyes of guys everywhere, and just as JT is flirting with her Sully finally notices her.  Manny’s new look attracts a large crowd to Emma’s Environmental Club Meeting, but things come to a halt when Raditch tells Manny her that she’s violating the dress code.  From that point on Manny decides to not wear underwear at all.  JT finally gets the courage to ask Manny out, but she tells him she already has plans (with Sully).  Emma tells Manny that her attitude has changed, and Manny tells Emma not to talk to her if Emma can’t accept the person she’s become.  In the end Manny gets what she wanted, to go out with Sully, but possibility at the expense of her friendships with Emma and JT. 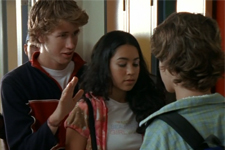 This episode is one of those that sticks out in my mind when it comes to a character maturing.  In Season 1 and Season 2 Manny looked and felt like a young character, almost too young at times.  She always played sidekick to Emma, but this is when it seemed she truly began to become a character that could stand on her own, even if her personality took a nasty turn.

And with that said, I like the way this episode turned out.  A Manny/JT pairing would’ve been too mushy, but the fact that even though she was interested in JT she immediately forgot about him the second Sully took interest made this story come full circle.  It was a solid portrayal of a girl gaining confidence, enjoying the attention because of it and using it to ultimately get what she wanted.

I don’t necessarily think Manny had a HUGE ego…she never really came off as arrogant to me because she never blatantly stepped all over anyone in the process.  She just came off as someone who felt like they were invisible, then became very visible and was willing to do whatever it takes to maintain that level of importance.  The key scene in this episode is when she bent down to pick up something in front of the class (when she wasn’t wearing underwear) and JT abruptly stopped her.  She was completely oblivious to what was going on in that situation, and that perfectly describes her mentality the moment Sully finally noticed her.  She truly never realized that she’d hurt JT feelings.  She didn’t even pay attention to Emma or anything she said or did (including the Environmental Club) because all she could think about was how Sully finally liked her.  I’ve been in JT’s position countless times and oh it is not fun.  But I love how this plot addresses Manny’s one-track mind, a symptom many girls get when they become boy crazy.

PLOT B SUMMARY:  Craig is finally off punishment, and reveals he and the guys have a band.  Joey gets excited and lets them practice in his garage.  He also decides to break out his old keyboard and jam with them.  Insisting that Craig’s band be awesome, Joey “takes them under his wing” and even uses a video camera to record their rehearsals so he can critique them.  However, he accidentally leaves the camera running after leaving the room, and the gang (especially Craig) blast him for being delusional and overbearing.  Craig feels guilty about what he said, and Joey says he just wanted to feel young again.  Joey promises to not interfere anymore and the band gets back to practicing in the garage.

This is your standard “old guy wanting to live vicariously through young guy” story, but it resonates much more if you’ve actually watched Degrassi Junior High/Degrassi High.  Joey is not even exaggerating when he says that his band was his life.  While Craig just thinks of the band as a hobby where he and his friends can just jam out, Joey doesn’t want Craig’s band to fizzle out the way his did.  While Joey did get out of hand taking the band far too seriously than the boys, this plot is secretly a good lesson in taking advantage of the now before regret (and the swift pace of life) kick in.