Black Friday's almost here...they've gotta killer holiday sale going on. The perfect gift for the Wesley in your life!!

I have somewhat mixed feelings about Halo.  I thought Part 1 was superior to Part 2 and that’s disappointing, given that the episode as a whole went so downhill after jumping out to a pretty great start.

Still hopped up on prenatal pills and KC still acting like a guy you’d find on Maury, Jenna is frustrated beyond belief.  Little does she know that KC still isn’t over her…however, she thinks he wants to get back together when she receives one of the Power Squad’s wishing star and assumes he sent it.  Jenna invites him to her prenatal class.  He agrees, however, he ends up being a no show.  Sav (who by this point has already asked Jenna to do a duet with him at the dance), confesses that he sent the wishing star, and as a friendly gesture offers to go to prenatal class with her.

As a result of the class, the star and the duet, Jenna is head over heels for Sav now.  She kisses Sav, who is taken aback, then brags to Holly J about it.  Holly J reveals that she and Sav are dating, and scoffs at the idea that Jenna will steal him from her.  Sav wastes no time telling Jenna that he’s not interested, and while talking the situation over with Holly J, she devastates Sav by telling him that she slept with Declan.  Meanwhile, KC feels like an ass for standing Jenna up, and knowing that another guy sent her a wishing star makes him realize how much he still cares about her.

Sav tries to pick Jenna's nose during their duet, but he misses.

So this plot splits into two stories…the one where KC apologizes and he and Jenna get back together again, then the two plot to get Sav and Holly J back together.  They force Holly J to leave work, then trick Sav into jumping into a limo at Adam’s secret party, where Jenna fakes going into labor.  There Holly J and Sav apparently talk things out and things go back to normal between the two.

Though I think we got a better acting effort out of Jessica Tyler (I prefer her peppy overacting over being a zombie anyday), I didn’t like how it ended up being nothing more than a ploy to get KC and Jenna back together.  KC’s been adamant about not being involved (even if he still wants to date Jenna), so their reunion just seemed extremely random.  The whole Holly J/Sav issue seemed anticlimactic.  After making a big deal out of Holly J sleeping with Declan, I figured they’d  spend more than just a side plot of a main plot delving into the dynamics of their relationship, which is far less casual than they’ll admit.  On a side note, it was almost surreal how people at Degrassi were surprised that Holly J and Sav were together, given that we (the viewers) have known about their secret fling all along.

Jenna is the queen of bizarre faces.

At the end of Part 1 I was convinced this plot was headed in the right direction.  But then Holly J vs. Jenna was a non-issue…even if we knew Jenna didn’t have a chance with Sav, it would’ve been nice to play it out. And suddenly KC has his head on straight and now he and Jenna are ‘happily ever after’ for the moment.  Things flowed naturally into Holly J and Sav’s issues, but there was no need for their conflict to be created and resolved so quickly.  I don’t even know why it was brought up at all.  The fact that it was a “finale” episode has no bearings on how I feel about the plot.  It’s not as if they were writing/shooting this episode as if they knew it was going to be a mid-season finale, because they didn’t (that’s up to the networks).  But as an episode that’s 3/4ths of the way through this season (an improvement over the last three seasons), it’s disappointing to watch a storyline succumb to a need to wrap things up so hastily.

PLOT B: Wesley goes on a date with Anya.

Wesley decides to finally cash in on his date with Anya…you know, the one she bid on at the bachelor auction during The Boiling Point.  He decorates her locker with wishing stars, and awkwardly asks her out.  She agrees, feigning excitement, but Wesley is just glad she said yes.  Poor guy is so excited that he ends up having a wet dream about Anya during the middle of class.  To avoid any sticky situations on his date, he buys a supplement called “Happily Ever-Laster,” to quote, “Stop premature ejaculation FAST!!!!”

Wesley reveals his date plans to Anya by randomly showing up in front of Degrassi in a limo…they’re gonna go to dinner and then to Adam’s secret party.  At dinner Wesley gets nervous and spills water on Anya’s dress.  He freaks out and takes a handful of the sex pills, which earns him an erection guaranteed to last longer than four hours and a one-way trip to the hospital with Anya.  While waiting he learns Anya doesn’t like him, but likes Dr. Chris (the doctor in charge of Anya’s mom’s cancer treatment).  Wesley sends Anya for coffee, and she returns to find Wesley gone and Dr. Chris standing there…Wesley had told Dr. Chris that he needed to stay past his shift to have coffee with her. 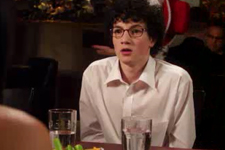 Man, Wesley is amazing.  He’s surpassed Clare as my favorite character of Season 10.  Not only is he awkwardly entertaining, but he’s a genuine standup guy.  That and I can relate to his extreme awkwardness.  I laughed and cried throughout this plot; a guy has a wet dream AND a super boner in the same episode?  Take that JT and Spinner (though let’s be honest, Spinner’s is still the best boner of all time)!!!  Also, Wesley’s facial expressions and mannerisms sometimes make me tear up almost instantly…like right before he asked Anya out in Part 1, and also when he looked down after realizing Anya liked Dr. Chris. It’s probably because I feel his pain about the whole being told you’re sweet and amazing, but not being good enough to be boyfriend material thing…oh wait, is that my issues bleeding out all over this review? 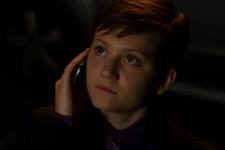 We're left wondering where Fiona is...

Adam’s crushing hard on Fiona, and decides he can woo her by throwing a New York style party.  He decides to have it at a secret place in the woods Eli and Clare recently discovered…kind of like how Columbus discovered America.  Calling it a “secret place” is lame, so I will now refer to it as The New Ravine;  new because it hasn’t been invaded by drugs, whores and Jay…yet.

Adam goes to great lengths to organize and setup for the party and even lets Fiona know that he’s doing this for her, and she agrees to come.  Everything within the episode (aka the other two plots) lead up to the party, and while everyone else is dealing with their own issues Adam is impatiently awaiting Fiona’s arrival.  He calls Fiona, but she doesn’t answer.  Adam leaves the party, and the final scene is him standing outside of Fiona’s building, leaving a voicemail wondering where she is and if she’s ok.

There wasn’t much to this plot, and it’s an obvious setup for Fadam in the future.  It’s sheer coincidence that this storyline’s cliffhanger aligns with TeenNick and MuchMusic’s fall finale schedule.  Hell yeah it’s leaving us hanging, but I actually like it.  It’s like we’re feeling the same anxiety Adam’s feeling, except we’re gonna feel it for the next few months.