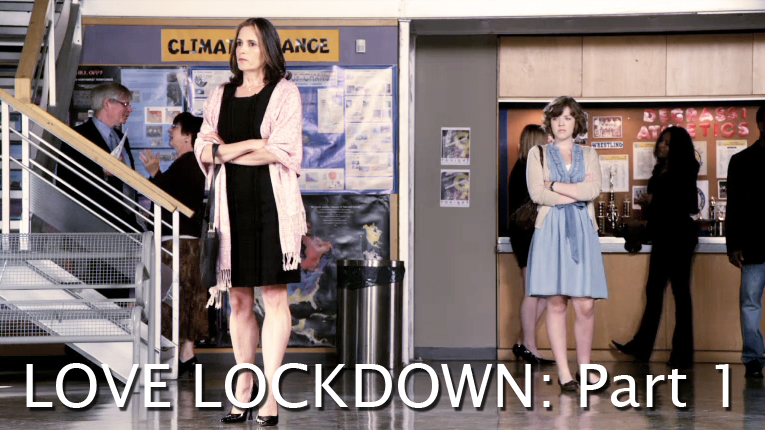 PLOT A: Declan returns and plots to get Holly J back.

Declan's "AHAHAHAHAHAH you're fooling around with Sav?!?!?!" face

So it’s been a while, but Declan is finally back!! He’s back in town for the Grundy Awards (Degrassi’s play from last year “Space Awakening” has been nominated), and to win back his beloved Holly J. The problem is Holly J and Sav are a “thing,” and for whatever reason Holly J seems disinterested in actually reuniting with Declan.

He’s not going to give up though, putting into motion a thorough plan to get her back. He lays the compliments on thick during his Grundy acceptance speech by dedicating it to Holly J, then invites her (and Sav) to the Coyne’s after party. Even though Holly J rejected him out on the balcony I was thoroughly impressed with Declan’s plot to get her there….getting Sav away from her by letting him DJ the party.

It was also very clever of Fiona to get drunk so that Holly J would stay the night with her and Declan. The ending of this plot is confusing though…specifically Holly J. We all know where both Declan and Sav stand, but it’s hard to pinpoint Holly J’s feelings in this episode. What started the confusion is her telling Declan about Sav, and telling him that what she and Sav have is nothing serious. Yet she tells Sav (who spends the episode questioning Declan’s motive and every move, and rightfully so) that “this,” aka their extended fling, is what she wants right now.

So at the end when Declan’s kissing all over her and she’s saying “We shouldn’t be doing this,” I see her half-hearted resistance (though her face says it’s way more than that) as coming from a place where she feels like she’s cheating on Sav, despite her telling everyone (Declan, Sav and us, the viewers) that they’re nothing more than friends with benefits. I like that this episode features Holly J engaged in contradictory behavior and conflicting emotions, leaving me feeling the muddled emotional mess she, as well as Declan and Sav, are bound to experience in Part 2.

PLOT B: The fighting between Clare’s parents drives her to be disobedient.

Declan isn’t the only one to return to Degrassi…Eli is back from suspension, and he wants to take Clare out on their first official date. It’s the same night as the Grundy awards, and Clare’s mom immediately rejects the idea of Clare going out. She tells Clare that they (along with her dad) need to have a family discussion after the awards, and Clare believes they’re going to tell her they’re getting divorced, given the continuous fighting between them.

Clare wins a Grundy award, however her parents are too distracted to be happy for her as they even argue DURING the awards ceremony. Backstage Clare tells Eli that she her parents said she couldn’t go to the Chuck Palahniuk book reading, but she intentionally decides to disobey them and goes anyway. Clare also decides she and Eli should both get piercings.

Eli questions Clare’s rebellious tactics as she refuses to answer her phone all throughout their date. I enjoyed the fact that Clare rebelling wasn’t over exaggerated in this episode, aka her all of a sudden going off and doing drugs or something of that nature. It was actually humorous that getting her ear pierced is something that would be edgy enough to piss off her parents. I like how the fighting between Clare’s parents has hit such a nerve with her, and upon knowing that they’re coming to an end has her behaving in the passive aggressive manner we all wish she could’ve possessed when initially dealing with Jenna way back when. 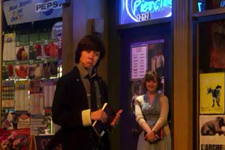 Noooooo Clare you're walking straight through the gates of hell!!

At the end of this episode, when Clare gets home late and her parents lay into her, she sarcastically mentions that it’s refreshing to see them mad at her instead of each other. The question now is, does Clare continue to behave this way in order to “stick it” to her parents, or to create a situation where her parents focus on her negative behavior instead of constantly arguing? 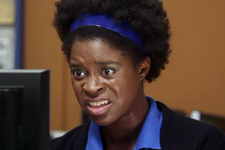 If I couldn't access my blog, I would be devasted too.

There’s really not much to say about this “plot.” I don’t have a positive or negative thought about Chantay; to me she’s a character that’s sorta just there. Keeping up the theme of cracking down HARD, all clubs must have a staff supervisor. So without one, that means the Power Squad must be canceled. On top of that, Degrassi has gotten uber high tech by installing a powerful firewall and cell phone jammer to basically prevent anyone at the school from doing anything.

Anya’s annoyed, but Chantay seems to be the only person that’s truly upset by the news, since this is the year she was FINALLY named squad captain. She receives no support for an attempt to rebel or speak out because, thanks to the strict new rules, no one wants to get in trouble.

I simply didn’t see the point in this plot.  I don’t even know why I’m bothering to review it at this point. It actually detracted from the episode as a whole because it seemed completely out of place when put next to the other two plots. And there was so little time in the episode devoted to this plot that I wondered “Why even bother?” A key factor in episode plots (in the Part 1 episodes) is whether or not they make you want to find out what happens next, and unfortunately this one doesn’t. I’m sorry, but I don’t really care what happens to the Power Squad.