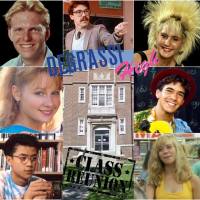 Degrassi fans in this day and age don’t realize how good they have it. Not only do we have some level of personal access to the cast online, all you need is the ability to travel and you can freely meet Degrassi cast members, from TNG to Next Class, at various events. It was just a few years ago that Degrassi coordinated with Much/MTV to host free parking lot parties, where you could get up close and personal with everyone from cast members past and present, to the writers/crew and even the show’s Executive Producer, Stephen Stohn.

But often lost in all of the Degrassi talk these days is Degrassi Junior High/Degrassi High, the series that established the Degrassi universe as we know it.

The Classic Degrassi cast were kids the show hired off the streets with little to no experience. They weren’t appearing on other shows or in movies, or simultaneously working on a music career like nearly every Degrassian today, so when the show ended most of them pursued something other than acting and faded into obscurity.

We haven’t heard very much from that generation in years, but Degrassi legend Pat Mastroianni is changing that.

For updates on the Degrassi Tour: https://www.facebook.com/Degrassitour/