NextDegrassi Promos 1403: If You Could Only See
Degrassi 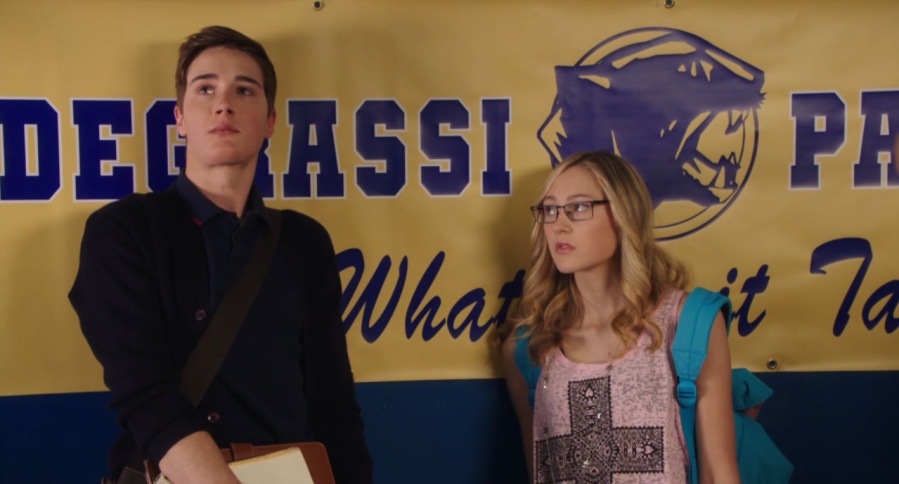 Can’t We All Just Get Along?

In 1401, Miles talked to a reporter about his father.  In this episode, we learn the reporter then published an article claiming Mr. Hollingsworth is a homophobe who hates his own son.  Instead of yelling at Miles, Mr. Hollingsworth decides Miles should skip school and the two hit up the golf course for the day.  Miles, who’s preparing to take his driving test, is even allowed to drive to the country club to practice.  However, Miles realizes his father is using him as a photo-op when the reporter shows up at the club and takes photos of the Hollingsworth men hugging.

Miles storms out as Mr. Hollingsworth is being interviewed, and at home Miles accuses his dad of manipulating him.  When Miles tries to leave, Mr. Hollingsworth grabs him and slams him up against a wall; afterward the two are stunned, and Mr. H says it was an accident.  Miles goes to school to find Tristan, who now wants nothing to do with Miles; Tristan thinks Miles went public with their relationship to piss off his dad.  Maya finds Miles upset, and while he doesn’t tell her what’s happening, Maya urges him to talk to someone about what’s bothering him.

To make up for what he did to Miles, Mr. Hollingsworth buys Miles a new car.  Miles shows up to Degrassi and tells Tristan he’s been invited over for dinner.  The two reconcile and Miles insists that he’s making things right with his dad, but Maya knows not everything is okay.

Zoëmund had been doing a lot of heavy flirting lately.  They’re not dating, but Zoë gets upset when she sees Zig is receiving nude pictures from girls on Oomfchat (the Degrassi version of Snapchat).  Zig doesn’t understand why Zoë would be upset, until Grace points out that since her sexual assault, Zoë might not feel comfortable dating someone who’s looking to receive nude pics.

However, Zig soon receives a nude Oomfchat from Zoë.  He tells her she doesn’t have to send him pics like that, but she gets upset because she feels like she’s being judged again; she’s tired of people thinking she should be treated or behave a certain way since she’s been sexually assaulted.  Zig tries to earn Zoë’s forgiveness by humiliating himself…he paints the words “I like you” on his chest shirtless and apologizes to Zoë in front of everyone.  However, Zoë refuses to accept his apology and tells him she’s done with boys.

Reality has finally set in for Drew, who realizes he’s going to be a dad.  He breaks the news to Dallas, who urges Drew to talk to Clare about all of the options in regards to the baby.  Drew tells Clare they’re too young to be parents, but she tells him it’s her choice and she’s keeping the baby.  She then tells Drew that he doesn’t have to be involved in the baby’s life.

Drew is relieved to find out he’s not obligated to be responsible for the baby, and sets his sights on settling things with Becky after days of avoiding her.  However, Dallas tells Drew that his decision to not be a part of his baby’s life is stupid.  Dallas tells Drew about the anger the kid will feel, and what could happen if you suddenly wanted to be a part of the kid’s life.  In Dallas’ case, he hints that he wanted nothing to do with his son Rocky at first, but by the time he did it was too late.  This causes Drew to reconsider, and despite Clare not really wanting him involved, Drew says he will be a part of the baby’s life somehow.

Drew also tries to make things right with an injured Becky Baker.  When Drew confirms that Clare is pregnant, Becky breaks up with him.

*There’s several things to note about Miles’ storyline:
1) Miles is unaware of how similar he is to his father, and that comparison gets under his skin.  This has to be one of the deepest looks at a parent/child relationship we’ve seen on this show.  As disturbing as this is, it’s even more disturbing watching my fellow fans talk about how they relate to this plot.

2) I keep mentioning that Degrassi’s doing this thing where characters’ personal issues bleed out and directly affect how they interact with those around them.  I’ll bring it up again when I talk about Zoëmund later, but once again the death of Cam lingers and is a driving force behind Maya’s behavior.  She’s the only person that sees what’s going on with Miles.  He isn’t okay, just like Cam wasn’t okay when he committed suicide.  Maya sees the warning signs and you’d better believe she’s not going to let it go, regardless of what Miles says.

3) I feel genuinely bad for Miles.  Mr.  Hollingsworth didn’t take Miles golfing or buy him a car because he loves him.  All this kid wants is to be loved by his father, but everything Mr. Hollingsworth does is motivated by his own political interests.

*Zig and Zoë were on two different pages in this episode.  Grace helped convince Zig that Zoë isn’t necessarily okay after what happened with the sexual assault and trial.  His conversation with Zoë about her not needing to send him pictures was him trying to be genuine and understanding because he likes her.  However, Zoë completely misinterpreted his intentions.  Because of Becky’s ridiculous behavior in Smells Like Teen Spirit, Zoë saw Zig as casting some kind of judgement against her for being sexually assaulted.  There are times where Zoë seems fine, and others where she’s clearly not okay.  I’ve been impressed with how Degrassi has made her character go through back-and-forth swings since the assault; it would’ve been easy for them to completely reset Zoë’s character in season 14 and pretend like nothing ever happened.

*Good job, Drew.  It only took a 30-minute episode for the good side of Drew to overtake his chronic, moronic side.

*So…what exactly was the point of Drecky? I understand the mechanics of how/why they came together.  But I don’t understand the decision to bring together a ship that clearly wouldn’t sit well with fans, only to have them break up all of two episodes after they got together.

*Oh, so that’s what happened with Dallas’ kid.  Bless Ramona Barckert…of course she would find a way to insert some sort of reference and explain why the hell Dallas’ son Rocky randomly appeared in a handful of episodes, and hasn’t appeared since.  I roll my eyes when people pull out their rose-colored glasses and act as if during the TNG years every storyline was wonderfully fleshed out and Degrassi never dropped plots that could’ve been continued.  If that were truly the case, I would’ve gone into tonight’s episode expecting a Rocky mention as opposed to assuming he would never be mentioned again because he hasn’t been mentioned in about 20 episodes.  This kind of random closure to a plot that was opened up such a long time ago and seemed dead RARELY happened in the TNG days.  Given the fact Dallas is a secondary character, I almost guarantee back in the TNG days the concept of Dallas as a father would’ve been blackholed after the nuts allergy incident.