Previewing Degrassi’s You Are Not Alone 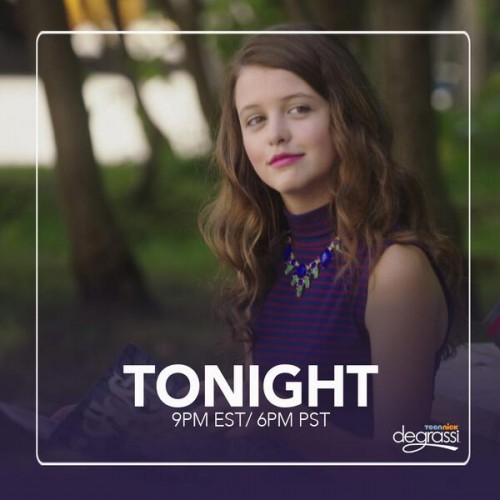 Degrassi returns with an all new episode TONIGHT at 9pm, as we head into the final stretch of season 13.  I can honestly say that this season has been a rollercoaster ride in terms of how I’ve felt about it.  I’ve read lots of comments that generically write off season 13 as a complete wash, but I don’t feel that’s necessarily fair to the good things that have happened this season (Even season 8, a wildly unpopular season, had a few great moments).

For me, 13C was a massive step up in quality from where this season started last summer.  That’s great and all, but I also need Degrassi to step its game up even more in 13D.  My most anticipated storylines are Tristan and Yates, and of course the sexual assault trial and the personal archs for the characters involved.

Another arch that’s caught my eye is Drew’s.  I know people will whine about him always having storylines, and I get it.  Despite Eli fans and haters alike having spent season after season convinced that Eli is Epitome’s pet, Drew Torres has in fact been the show’s leading male since season 11.  With Eli out of the way, it’s only now that people are realizing Drew’s prevalence.  I was once on the “Drew is getting on my nerves” train, but since the latter half of season 12 I’ve been intrigued by what they’re doing with him as he tries to become mature.  It’s looking like he’s going to blow his job working with Mr. Hollingsworth’s campaign, and I want to see whether or not this kid has finally learned how to deal with failure.

Without the threat of a love triangle looming overhead, it looks like tonight Degrassi will FINALLY dig deeper into Zig Novak.  He behaved like an absolute ass in 13C, not only toward Miles but Maya as well.

I’ve yet to see anything that indicates Maya is interested in Zig romantically.  Despite that, Zig has managed to manipulate Maya and wrap her around his finger.  Zig isn’t aware of it, but he was able to do so easily primarily because of the amount of guilt Maya has harbored since discovering Zig was homeless.

In the end, the way she’s interacted with Miles and Zig all leads back to what happened with Cam.

I’m not sure what to expect with Winston and Frankie, two characters who are currently serving their time as secondary characters.  Degrassi’s done a pretty good job when it comes to finally giving these types of character the spotlight, so I’m confident things will be interesting.  I’ll post my review of this episode later tonight.